Weilerswist 2021: What has happened so far

Weilerswister was not spared either

The immense masses of water in the Erft and Swist rivers have flooded houses and roads; in the villages of Metternich and Vernich, but also in the core town of Weilerswist, residents had to be evacuated. Roads and bridges have been washed out or broken in many cases and some of them are still impassable. Some members of the partnership have also been affected by flooded cellars or worse.

Fortunately, no one in Weilerswist drowned or lost their lives in the floods. Nevertheless, many citizens lost all their belongings and their homes and had to be accommodated in emergency shelters.

For several days, our fellow citizens were without electricity, internet and, in many cases, without mobile phones and thus without any means of communication. Ancient radios had to be made functional with battery power; otherwise, the latest information was only exchanged verbally on the street among neighbours. Fortunately, the drinking water supply has remained largely intact.

Rescue and disaster relief workers have rushed in from all over the state of NRW and other federal states and have significantly relieved our local fire brigade and the Red Cross.

In the meantime, the clean-up work is progressing. Citizens have emptied their houses and cleared their destroyed household goods for removal to the street. Mountains of rubbish are stored temporarily and have to be removed.

Happiness and misfortune are very close together here and everywhere in the region. Some people are deprived of their livelihood, others who live only a few hundred metres away are hardly affected by the disaster.

Many people have come to pitch in and help with the clean-up. Donations in kind for the initial need have been received in large quantities and are no longer necessary. In the meantime, the main problem for those affected is the replacement of food, clothing, household goods and furniture or even living space. The municipality of Weilerswist has help available for these cases, which can be found on the Internet at
https://weilerswist.de/lebeninweilerswist/menschen/hochwasser-2021.php

The municipality of Weilerswist has also set up a donation account into which amounts of money can be deposited for the flood victims:
Gemeinde Weilerswist
Kreissparkasse Euskirchen
IBAN DE22 3825 0110 0001 5000 16
Intended purpose "Hochwasseropfer Weilerswist".

Little by little, life is coming back to our region. It will take years to restore everything, but with great effort and perseverance we will succeed.

We wish all those who have lost their belongings in this flood disaster courage, confidence and a speedy return to a more carefree everyday life! 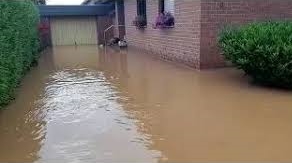 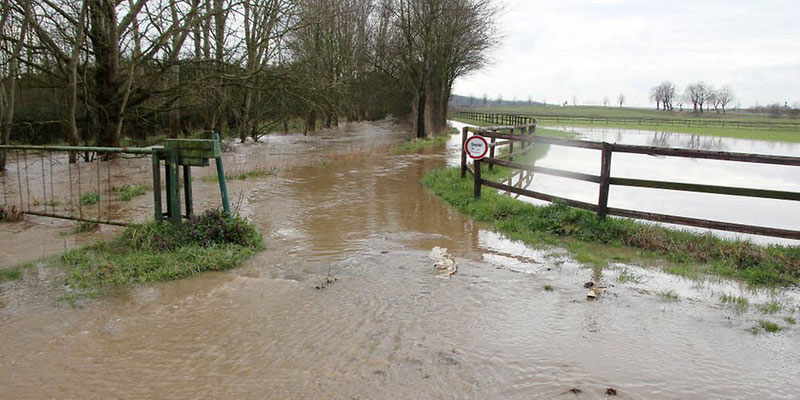 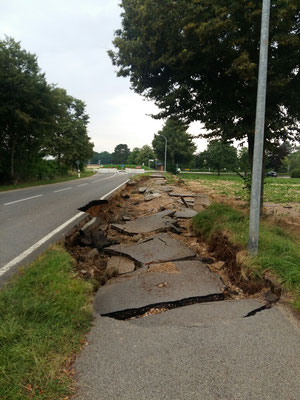 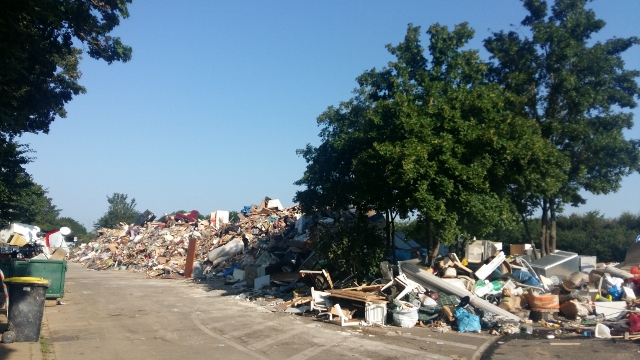 From our twin town Whitnash we received the following letter on the flooding from the chairman Alistair Macfarlane:

Good morning Janice and thank you for your email updating us on the serious problems you are all facing in Weilerswist and the surrounding areas. As has been demonstrated, it is a disaster area and I hope the federal government can assist in restoring damaged homes and the local infrastructure. On a personal note, it is those that have lost personal treasures and belongings which can never be replaced. My heart goes out you all and am praying that life returns to near normal in the not too distant future. I know you have a wonderful community spirit and this will help towards achieving this end.

So stay safe and well and I wish you and all your family as well as our friends in Weilerswist our very best wishes for the future. Love and blessings

Alistair Macfarlane, who has lived in Whitnash since 1969, said, “You could have knocked me over with a feather when I was told I had been nominated to receive a Maundy Gift from Her Majesty The Queen.”

Each year, at the Royal Maundy Service, The Queen recognises and gives thanks for the work done by countless people for the wellbeing of their neighbours; work that has often been taken for granted or hidden.  The service this year was to have taken place in Westminster Abbey on 1 April, and Alistair had been chosen to be one of the recipients of a Maundy Gift.  However, due to current Covid restrictions, the service was unable to go ahead, and the gift was accompanied by a personal letter from The Queen instead.

Alistair had previously received a Campaign Service Medal for his service in the Royal Air Force in South Arabia during the 1960s.   This Maundy Gift was given in recognition of his service to the local community over many more years.

He is a regular volunteer of the local Foodbank and the Seniors’ Lunch, an active member of St Margaret’s Church and the chair of the Whitnash Twinning Association.  He is well known and much liked in the community, and he acts as an informal taxi service for several older people who might otherwise be housebound or unable to get out and about.  His community mindedness has shown itself consistently for many years.

“Receiving the Maundy Gift is a great honour, and my family and I are absolutely delighted.  I love helping people, and I can’t believe that I’ve received this great honour for doing something that I enjoy so much”

The Royal Maundy is an ancient ceremony, inspired by the Bible.  On the night he was betrayed Jesus washed the feet of his disciples and commanded them to ‘Love one another’. By the thirteenth century, the Royal Family took part in similar ceremonies on Maundy Thursday. Henry IV started a new Maundy Thursday tradition of giving the same number of gifts as his age. For example, when he was forty he gave forty gifts. Charles II started giving out coins and the tradition of giving coins has remained.

Recipients of Royal Maundy are elderly men and women, chosen because of the service they have given to their community or the church.  Usually there is a service in a cathedral to hand out the money. At the ceremony, the monarch hands each recipient two small leather string purses. A red purse contains ordinary coins and a white one contains silver Maundy coins, amounting to the same number of pence as the monarch’s age.  Due to Covid restrictions this year the service couldn’t take place and the money was posted to the recipients.

Continuing vandalism on the boules court

The chairman of the Boule Club reports on the current situation:

At last, we had fenced off the area of the barbecue hut with a construction fence in order to prevent entry and contamination.

On my Easter walk I noticed that parts of the construction fence were cut out in order to get back into the interior of the barbecue area. A piece of the cut wire was also pressed into the lock on the front door of the club house. If the lock is permanently damaged - after repeated attempts - the damage to the locking system with approx. 30 keys is at least 1000 euros.

We, the Boule Club, no longer see ourselves in a position to cope with the damage, noise pollution and constant littering of the boules area. Personal conversations, first in a friendly tone, and later with the request to leave the place immediately, are only useful as long as someone is on the place. It usually takes less than 15 minutes after leaving the square and the youth gatherings continue.

My understanding for the young people, also taking into account their current difficult situation, tends more and more towards zero, since it is a matter of willful damage to property and one can no longer dismiss it as a "rascal prank". All in all, the question arises for me: what else can we do? I also wrote to the community last week and asked how they feel about fencing in the entire area.

The Twinning Association here in Weilerswist wishes all our friends in Whitnash and everywhere a peaceful Christmas and all the best for the new Year.
As years draw to an end, it is usually a  time to reflect on the past events and what the year brought us.
Unfortunately, this year the Corona Virus did not allow us many events to reflect on!
Unfortunately all our other events - summer festival, trip to France as well as a concert under the motto "Spanish Night" - although completely organised - had to be cancelled due to the pandemic.
It has been a very difficult year - the whole world over. And we believe our problems are not over yet!  We, too, are now back in a national lock-down lasting at least up to the 10th January; but figures are still rising....
We hope that you, our friends in Whitnash are all well and bearing up.
Though from what we hear, things are not looking good in England either with a new mutation of the virus causing havoc in the south and spreading quickly. Then to top it all, Brexit now on the horizon with no deal in sight. Everything pretty dismal! :-(
It's probably too much to hope that Brexit won't happen, but let's hope, at least, that 2021 sees a u-turn in the course of this pandemic, so that life can get back to something like normal!
Wishing you all the best and hoping that we do get to meet in 2021!
Take care!

Merry Christmas and Happy New Year to all of or friends in Weilerswist!

Good morning from Whitnash which is now part of a very different World thanks to Covid 19, here in Whitnash we have done our best in these trying times with most people following the new rules that govern our lives, I presume in your home town the world seems a little different as well.

This is my 2nd term as Mayor of Whitnash I am looking forward to a challenging 18 months, yes in these times even the Mayoral term has been extended by 6 months, which will hopefully allow me to either welcome you to Whitnash and/or for me to pop over and see you all in your home town in the better times to come.

I am writing this note just after our Remembrance period, many years ago I was given a German/UK pin badge, and during these services of remembrance I wear this badge with pride, I am a great believer in forgiveness and reconciliation and I believe the twinning organisation is an integral part of the friendship not only between our 2 towns but of our 2 nations, during the past few years many twiners & students from Weilerswist have stayed with Cathy and myself and we have enjoyed every minute, very fond memories.

Christmas is a time for the family and to remember the birth Christ, enjoy your time together and in remembrance of a small baby, a crib a stable and a donkey.

Whitnash has missed the twinning visits this year and there is no Birmingham German market for us to enjoy your Beer and Bratwurst Sausage.

So keep your Beer cold and your Bratwurst hot and we WILL see you all in 2021.

Weilerswist 2020: What has happened so far 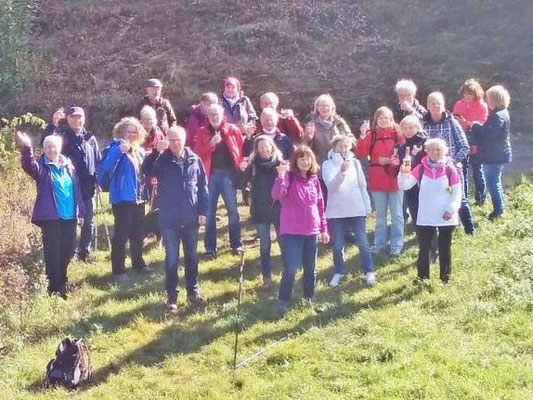 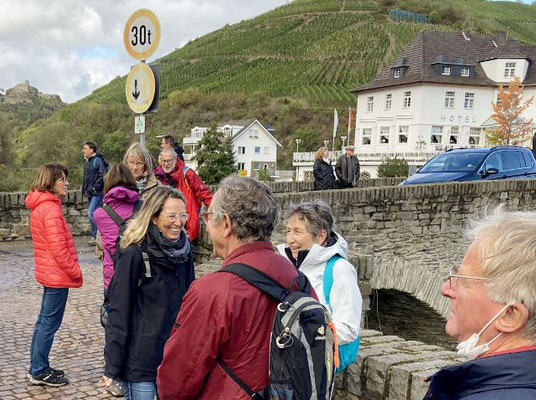 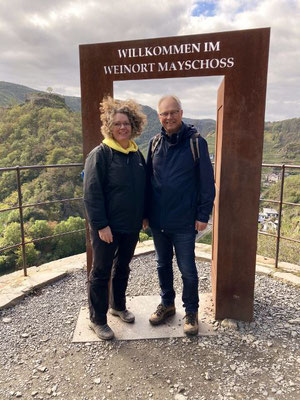 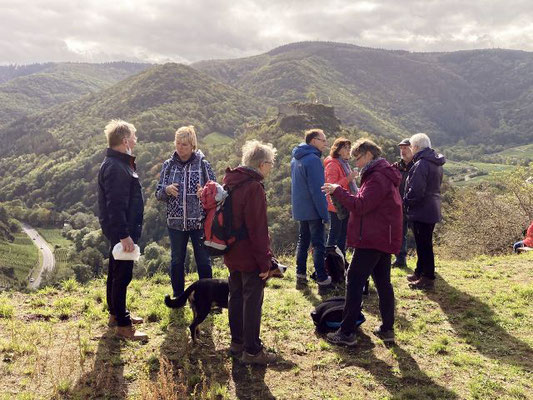 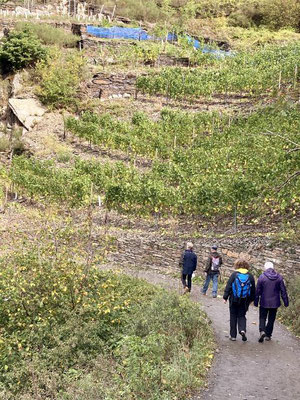 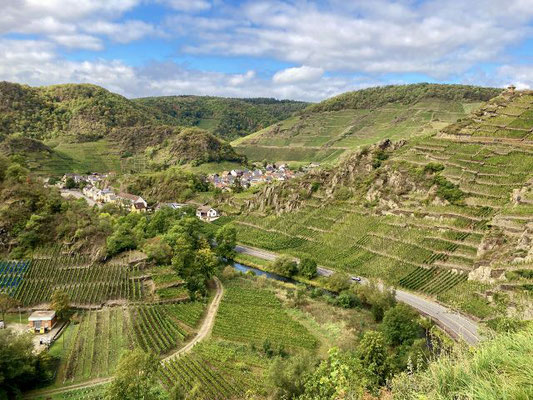 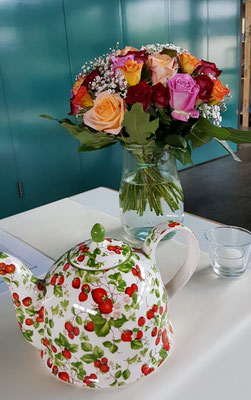 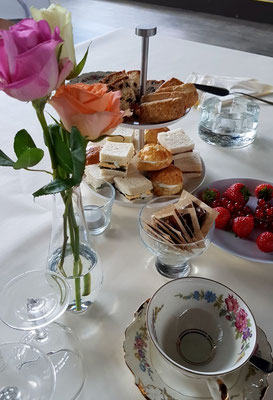 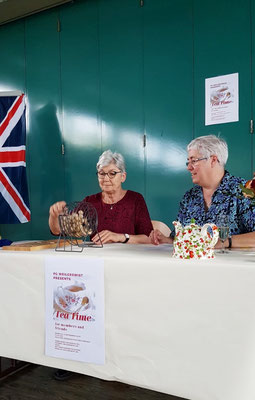 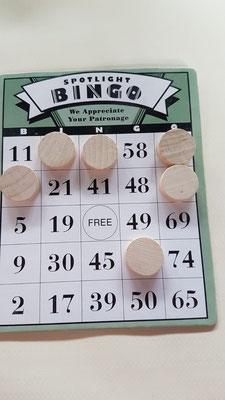 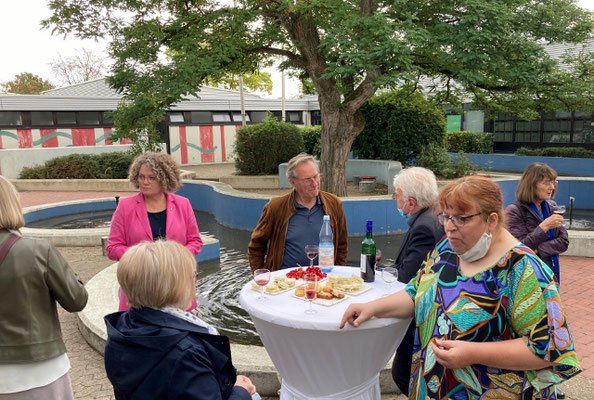 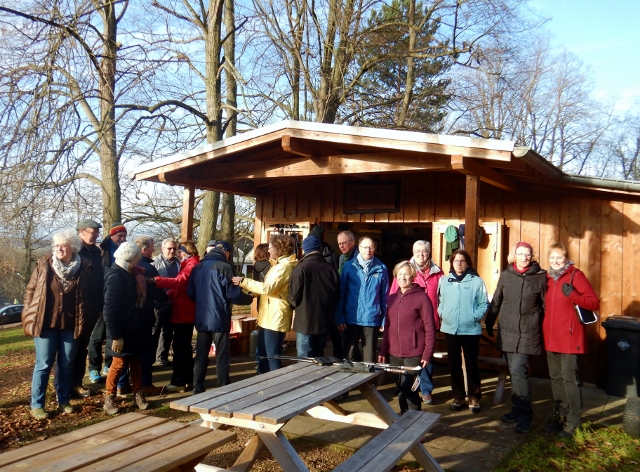 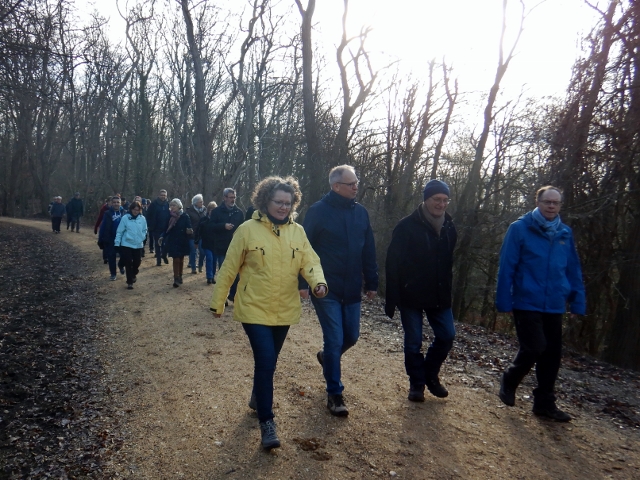 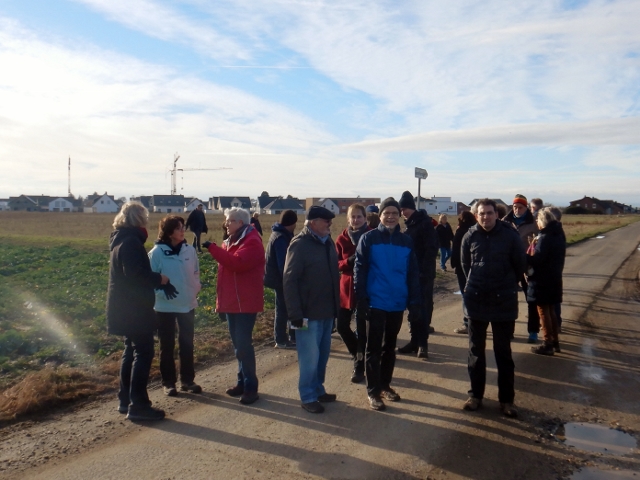 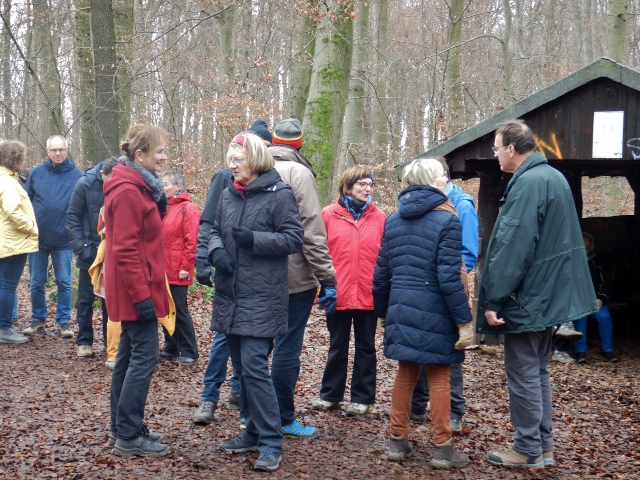 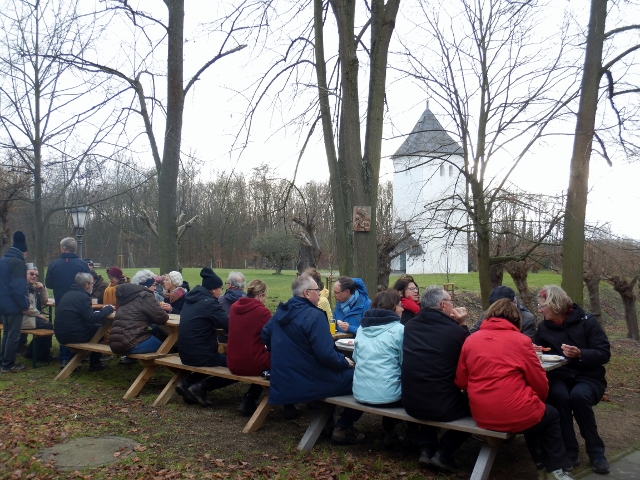 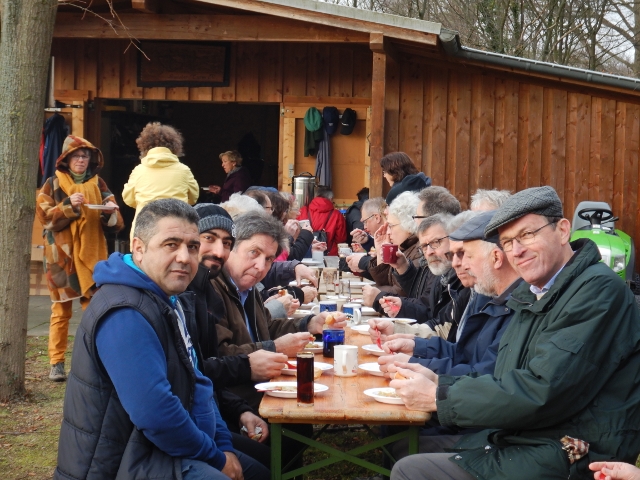